Cynthia Myer, NJWMA President 10/6/16 – “We would like to recognize another one of our NJ Drivers with a newly created award called Good Works of 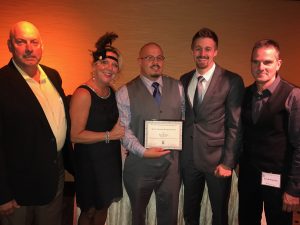 Heroism. This is the touching story and reminder of Road Safety. We all know how dangerous our roads have become with all the many distractions that surround us…this is a reminder of the importance of awareness and focus when you get behind the wheel.

Jose Rivera, a driver for Budd Van Lines, was driving his tractor trailer on Hwy 26… to South Carolina. While driving, Jose noticed two cars coming up behind him at a high rate of speed. When the cars flew past him, Jose noticed one was tailgating the other within inches…… the driver being tailgated looked petrified. Once the cars passed Jose, the front car moved over to the right lane, and as she moved over, the tailgater struck the rear bumper causing her to lose control. Her car went into a spin and eventually flipped over several times and ended up landing upside-down on the roof and in the way of traffic. The tailgater never stopped.

In order to avoid hitting the car with great force, Jose made an evasive move with his trailer by driving his unit across all lanes, and blocked other traffic from hitting the disabled vehicle. Jose instructed his crew to call 911….retrieved his fire extinguisher….and headed over to the victim. There was no fire, but glass everywhere. All the windows were blown out and the driver was trapped in the vehicle, upside down with numerous cuts and bleeding. Jose then used a furniture pad to place over the door frame’s broken glass…then used a box knife to cut the seatbelt from the trapped driver enabling him to lower her out of the vehicle and out of harms way.

Jose’s quick thinking and reaction prevented an accident from being a tragedy…and for this we acknowledge Jose Rivera for his Good Works of Heroism. “